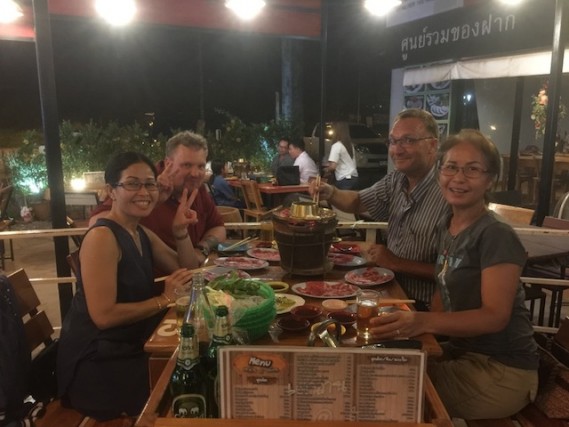 Resotel is an abbreviation of the words Resort, Restaurant and Hotel.

Baan is the Thai word for home.

Sanook requires a bit more explanation since it can not be captured in a “single-word-translation”, as it fails to capture the magic of this rather unique aspect of Thai culture.

An important thing in everyday life is "Sanook”, a word with deep cultural value in Thailand. It is a word meaning ‘fun’ but to just translate “Sanook” into ‘fun’ doesn’t do “Sanook” justice. Thai people love to have fun together but the Thai word “Sanook” is freighted with more meaning, more reverence than just 'fun'. “Sanook” is not just ‘fun’ as mindless diversion or frivolity; it’s ‘fun’ as an intrinsically valuable activity.

“Sanook" can represent many things: it’s about striving to achieve satisfaction, happiness and pleasure from whatever you do. Whether it’s work in the office, go out with friends, enjoy the karaoke bar or working in the rice fields, Thai people will try and make it “Sanook”; if it is not “Sanook”, it’s not worthwhile doing !

For Thai people "Sanook" happens with several persons; it is the output of a group that is in harmony, a group that does not necessary have an agenda. Something really can’t be “Sanook” if you’re alone; being around friends in social harmony is what makes an experience “Sanook”. When coming back from business, Thai people often ask "was it Sanook?” before "was it successful?".

“Sanook” is also a coping mechanism, one that provides “an emotional buffer against the more difficult things in life”. Although Thailand is known as “The Land of Smiles”, the Thai smile is considerably more complex, more nuanced, than most foreigners realise. Yes, Thais smile when expressing joy or gratitude, but they also smile to conceal negative emotions. Thais will smile during a tense standoff, an argument or even at a funeral. Perhaps Thailand’s ‘fun’ fixation is explained by religion. Thailand is, of course, a Buddhist nation, and “Sanook” is a Buddhist concept, a reminder of the impermanence of everything and the importance of living in the moment.

It is almost a rule of living for Thai people that whatever they do, it has to be “Sanook”. The concept of “Sanook” goes beyond having of a good laugh or a good time.