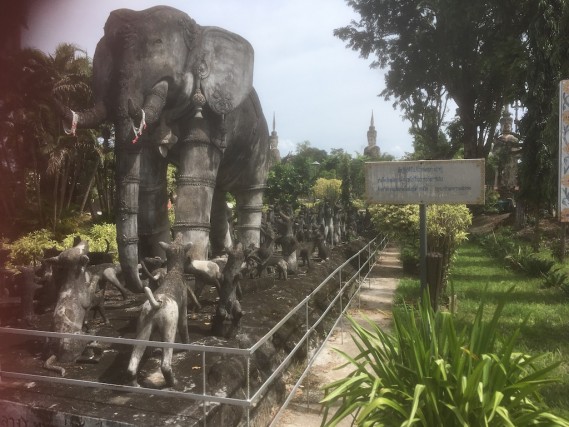 Sala Keoku is the most popular tourist site in Nong Khai and it is a must-see. It is called by many a ‘sculpture park’ but for others it is a place of worship and meditation. One thing for sure: it is fantastical.

The creator of the park is Bunleua Sulitat, born in 1932 in Nong Khai province. The story goes that he fell into a cave where he met a hermit called Keoku. Keoku would become his spiritual mentor (and later the namesake of Sala Keoku). After graduating from his apprenticeship with Keoku, Sulitat took to sculpting and in 1958 built his first concrete sculpture garden in Laos (Buddha Park near Vientiane). When the Communists came to power he worried that his unorthodox views might not be accepted and crossed the Mekong to Nong Khai. In 1978 he started the construction of Sala Keoku.

Sala Keoku has many sculptures, some towering 25 or so meters into the sky. Sculptures of that height aren’t unique in Thailand but it’s the style of the statues and the sheer number of them that makes this place special. Altogether there are over 100 sculptures.

Sulilat’s vision found its most detailed expression in depictions of the karmic Wheel of Life; The version in Sala Keoku mixes traditional and contemporary figures arranged in a circular pattern. It reveals the human progression from birth to death.

Souritat died in 1996 from complications arising from a fall from one of his own sculptures. His body resides in the main building and his followers claim his hair still grows.

No physical limitations visiting Sala Keoku and you easily spend an hour walking around, well worth the 20 THB entree fee. Sala Keoku can be perfectly combined with visit to the indochina market, NongKhai Mekong promenade and other sight seeing items. Please ask your host for suggestions and advise.