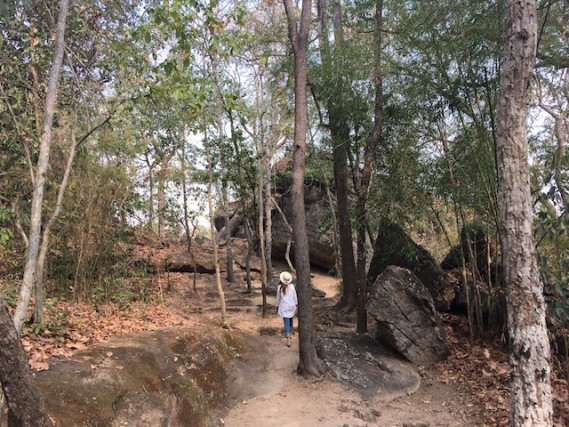 Phu Phra Bat Bua Bok historical park is a forested hill with natural rock formations shaped as caves with large rocky overhangs. The caves were used by ancient man as shelter and as temples where Buddha images were enshrined.
What makes this site unique, is that it contains traces of several different civilisations and cultures spanning thousands of years. The hill contains traces of prehistoric man, the Dvaravati period and Khmer presence.
The sandstone rock on top of the hill has been cut out during many centuries by glacier movement, wind and rain. Some of the rock formations provide natural shelter, others were carved into by man thousands of years ago creating cave like structures. Many of the rock formations harbour ancient Buddha images and served as ancient Buddhist temples.

Thousands of years ago, prehistoric man wandered around in this area. They left behind rock paintings made in red color depicting various animals and people. As the sandstone is fairly easy to carve, rooms were cut out some of the rocks to create shelters.
During the early days of Buddhism, the rock formations were used by travelling monks, providing them with shelter. A number of very old Buddha images placed in the caves shows the caves were used as ancient temples.

Boundary pillars from the Dvaravati period can still be found today at Phu Phra Bat. These pillars (or sema stones) mark the sacred area of the Dvaravati temples that existed here some 1200 years ago. The boundary pillars are decorated with depictions of apsaras, female spirits from ancient Hindu mythology. During the height of power of the Khmer empire some 10 centuries ago, the Khmer carved Buddha images into the rocks.
The park contains a total of 68 historic structures, most of which are prehistoric or ancient Buddhist temples; one should contain the footprint of Buddha.
A number of walking trails have been been made through the park and there are a number of view points, from where visitors will have great scenic views of the surrounding area. Phu Phra Bat is set in a beautiful, natural and relaxing environment. Wear comfortable shoes like sneakers and bring plenty of water.

The park is open daily from 8 am until 6 pm. At the visitor center you can get information about the park and the walking trails through the park. Admission is 100 Thai Baht per person for foreigners, 20 thb for Thai.