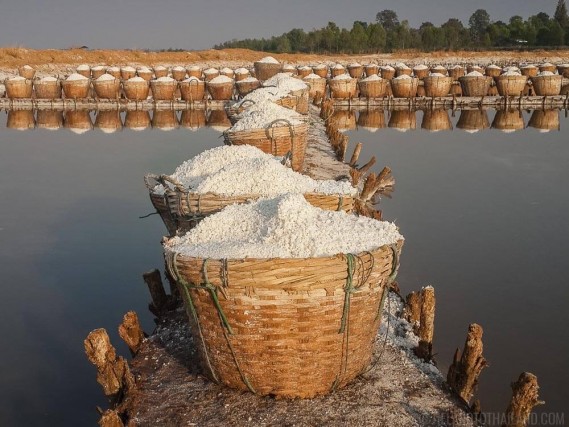 Isaan is a fascinating region of cultural and culinary diversity, however still overlooked by far too many travelers. Due to the 600 km distance to any ocean, the salt extraction around Resotel Baan Sanook is the last place you would expect to find it, but in Ban Dung and Kut Ruea Kham they boil and evaporate salt-rich groundwater to produce high quality rock salt.

A short history lesson explains why salt is extracted here:

Millions of years ago, majority of the Isaan, also known as the Korat Plateau, was covered with shallow seawater. The strong evaporation due to the dry climate left salt layers with a thickness of hundreds of meters. Centuries later, the connection between the Korat Plateau and the sea was interrupted because the plateau surface was lifted by tectonic movement of the earth. The salt layers were covered with large layers of fresh (rain) water and sediments.

Lifting the Korat plateau caused distortions and breaks in the rock sequence. Under great load and pressure, the rock salt flowed up through weak areas in the upper rock to form salt domes. The broken cap rock can then easily collapse when the top of the salt domes is leached by groundwater. This acts as a catalyst to pull the salt to the surface by capillary action against gravity.

The Korat Plateau, which is almost entirely Isaan, has many of these "salt domes", which also explains why groundwater wells often provide salty water and the soil also contains high concentrations of salt.

There are two different traditional ways of extracting the rock salt from the soil.
In Kut Ruea Kham they pump air deep (70 meters) into the ground, so that the salt from the deep salt domes mixes with groundwater, and is thus pushed upwards by piping and / or natural earth faults. The sediment is then washed out and the salt water collected, to be boiled in flat iron “pans” or large metal basins heated by a wood fire.
Water evaporates and pure rock salt remains.

In other places, including Ban Dung but also slightly north of Kut Ruea Kham, the salt water is pumped into large fields covered with plastic and the water is allowed to evaporate naturally by sun-heat.