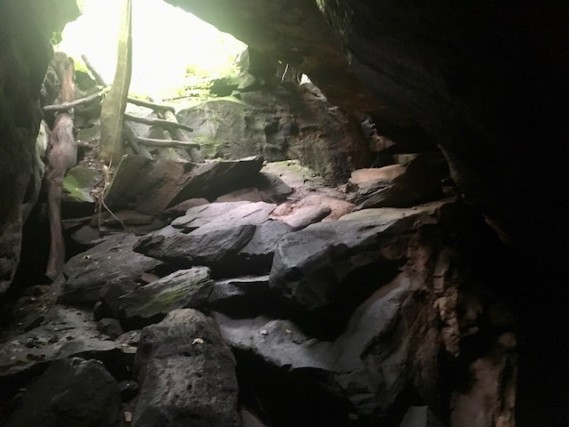 When you exit the 213 towards the Memorial, you follow a nearly 2 km road in, for Thailand very good condition, and eventually enter a large parking place but with no cars. The only car visible is from the Ranger on daily watch duty. Compared to other Thai Historical Memorials, like the War Cemetery besides the death railway in Kananchaburi, a Hugh contrast. The parking ends at the memorial of Mr. Tiang Sirikhan where you find steps and a path going down the jungle.

The Cave itself is a kilometer away, following the traill through the inside of Phu Phan Park, where you only hear sound of nature and your own breath; be advised the trial is not that tough but certainly not “a walk in the park”. After approximately half an hour you reach Seree Thai Cave and even now with the lush vegetation around the entrance removed to make it more accessible, you have to approach the cave pretty close and actually go downhill to recognise it as a cave.

During WorldWar 2 the cave was used by the ThamSeree Thaithat (Free Thai Movement) for storage of arms and food to support their operations in all of Northeast Thailand. What makes this cave so special s that it is not visible as a cave from higher view, special with the lush vegetation in the past, what gave it the advantage to be non discoverable by enemy forces,

Born in 1909 Mr Tiang SiriKhan, organiser and leader of the ThamSeree Thaithat, worked as a teacher of Udornpitayanukul School and Chulalongkorn University before and during WorldWar 2. After he served his country five times as a congressman and three times as a ministry of the cabinet. In 1952 Mr Tiang Siri Khan was abducted and slain by those in barbaric power.
Master Tiang SiriKhan was a model of an ideal teacher, honourable congressman who dedicated his heart and should to democracy and sacrificed himself to his country and fellow country men. Named “The Phuphan Warrior”, Mr Tiang Sirikhan is the hero of the common Thai people and the pride of Sakon Nakhon.

When in Sakon Nakhon area, more specific visiting other interesting points of PhuPhan national park, I certainly recommend to pay a visit to the Seree Thai Cave, even if it was only for hiking the trial towards it. Everybody with normal condition can go on the trail.
There is no entrance fee and visitors are a welcome break for the ranger on duty; for yourself it shows that WorldWar 2 left its marks around the globe, even in unknown Isan.