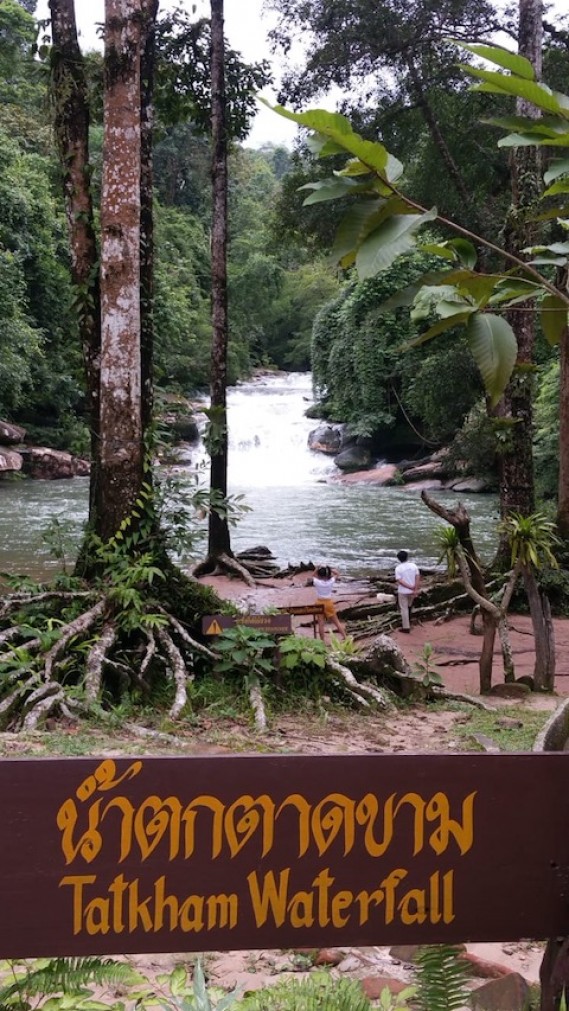 Phu Langka National Park covers the area of approximately 50000 km2 within Nakhon Phanom and BueanKan Province. The area includes layers of three mountains overlapping each other, interspersed with small mountain ranges spreading along Mekong River. There generally are lush forests such as dry evergreen forest, mixed deciduous forest and dry dipterocarp forest which are habitats of abundant wildlife (incl monkeys) and watershed for many streams. Best season to visit are from May to October when numbers of wild flowers and orchids bloom on top of Phu Langka Mountain.

Both waterfalls are accessible for swimming where Nam Tok Tat Kham is easiest to get into the water; for this reason be advised that on weekends and national holidays this waterfall is very crowded with Thai families who relax under the shady trees while their kids are playing in the water.
It is also possible to swim in Nam Tok Tat Pho and you can actually get behind the waterfall on the first tier, however it is more of a challenge to get into the water followed by a swim against the current to reach the rocks besides the waterfall.

Three nature trails are available, all at Nam Tok Tat Pho:
The first trail is Tham Ya route, taking one hour and a half for the distance of 1.5 kilometers.
The second trail is Pha Ngoi route, taking one hour and a half to two hours for the distance of 1.8 kilometers. Unique feature of the second trail is a viewpoint on top of Pha Ngoi where tourists can overlook the scenery of Ban Phaeng District and Mekong River.
Note that both are real trails……… when you start it looks like a piece of cake since the first couple of hundred meters is easy accessible path, but along the way it get more tricky and challenging; in the rain season (May-October) there can be periods the trail is even more difficult and you should certainly add an extra hour trail time.

The third trail is Chedi Kong Khao Si Bun Nao route, taking 2 days and 1 night to complete. Trekkers need to bring tent and bedding for the journey, while the officials will prepare your food. Unique features of this trail include the sights of various wild flowers, orchids, butterflies and birds on top of Phu Langka and the Chedi Kong Khao Si Bun Nao which is a rock field with a pagoda in the shape of a pile of rice, and the highest peak of Phu Langka Mountain. After conquering the mountain peak, trekkers can also enjoy the stunning view of sunrise and sunset. (To go up Phu Langka Mountain’s peak, contact the national park office for a guide and carrier, 7 days in advance)

Phu Langka National Park can be combined with a visit to Phu Sing or Phu Tok in the morning, followed by a relaxing swim in this park. It is even possible to include one of the trails. For details contact your host at Resotel Baan Sanook.

Phu Langka National Park is suitable for everybody, however activities like swim in Nam Tok Tat Pho or walk one of the trails requires good physical condition and appropriate footwear and clothing.

Like all National Parks in Thailand, entrance fee is required. For Phu LangKa National Park it is 200 THB/person for foreigners, however you can access the park all day at different entrances. At both waterfalls are dressing rooms with showers free accessible.